Rica Rose Abellera has always dreamed of becoming a Mechanical Engineer. It is a dream she has shared with her grandfather – who, with her grandmother, stood as her guardian - when her father passed away.

Her grandparents were able to put her through senior high school but old age has prevented them from working as hard as before. The 18-year-old dreamer from Kabankalan City in Negros Occidental graduated last March. She would have been able to take a step towards her dream by entering college but her family’s financial circumstances prevented her from doing so.

When her grandfather passed away, Rica’s drive to fulfill her ultimate dream reignited. However, she cannot turn her back against the needs of her family. Rica is the eldest of four children and is the primary caregiver of her grandmother.

Her aunt offered to fund her college education but she could not afford an engineering course for her. Luckily, her high school teacher told her about Gokongwei Brothers Foundation’s Iskolar ni Juan Tech-Voc (INJ) Program, which offers a year-long technical-vocational scholarship with an on-the-job training and employment opportunity in Universal Robina Corporation (URC) plants.

(I quickly prepared for it and took the exam. I passed the exam so I took the chance to be one of the Iskolar ni Juan students because of the big opportunity and help it can do to my family.)

“Being part of the Iskolar ni Juan Program is such a privilege for me. I started from nothing, but now I am one of the scholars, full of dreams,” she added.

Rica is just one of the 46 INJ scholars Batch 10 who have recently entered the Gokongwei Brothers Foundation (GBF) Technical Training Center this year. Her batch is the first set of scholars to stay in the new facility in Laguna where the center was relocated.

Where the future starts

For years, the GBF Technical Training Center, or TTC as it is fondly called, has helped transform the lives of over 300 INJ graduates. From being a site solely for the continuous technical training of JG Summit employees when it was established in 1999 in Litton Mills, Pasig City, the TTC has expanded to being a nurturing home to high school graduates coming from low-income families aiming to get a shot in life through the INJ program. 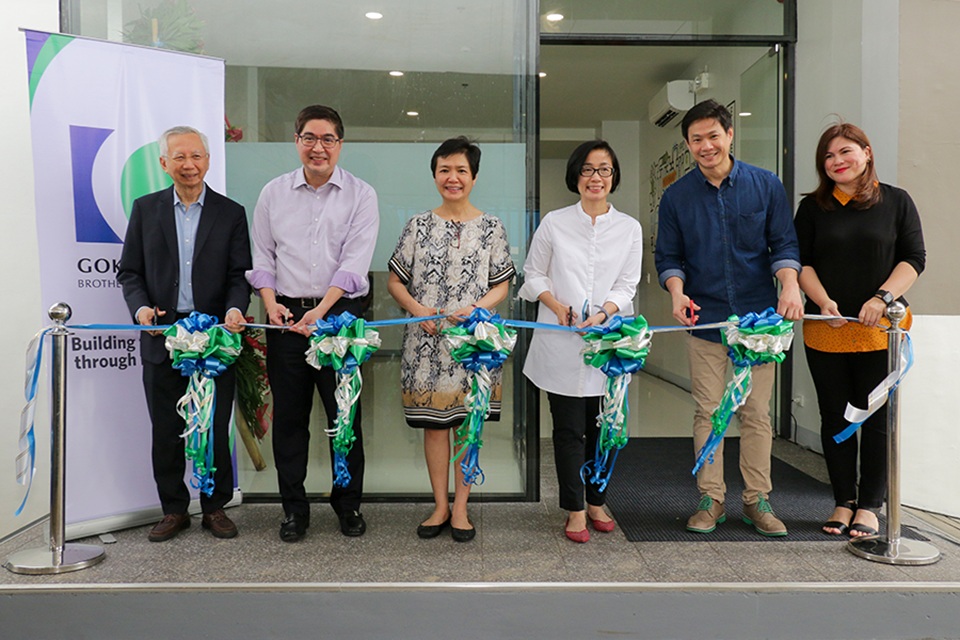 Being situated in Laguna gives the center space to expand in the future without being too far away from Metro Manila. The TTC currently houses the INJ and the Technical Training for JG Summit employees, which offers up to 35 courses in 2019. GBF is planning to also open scholarships for Digital Certification courses related to IT support, data science, and web administration.

“We hope to build other programs that will reflect the new skills needed in a changing world, now that we have a great facility on which to build that,” Gokongwei-Cheng said during the ribbon-cutting ceremony.

Standing on a 4,000 sqm lot is a P100-million prized facility developed by Robinsons Land Corporation. The center has two buildings: the school proper and the dormitory, which serves the board and lodging inclusion of the INJ scholarship. 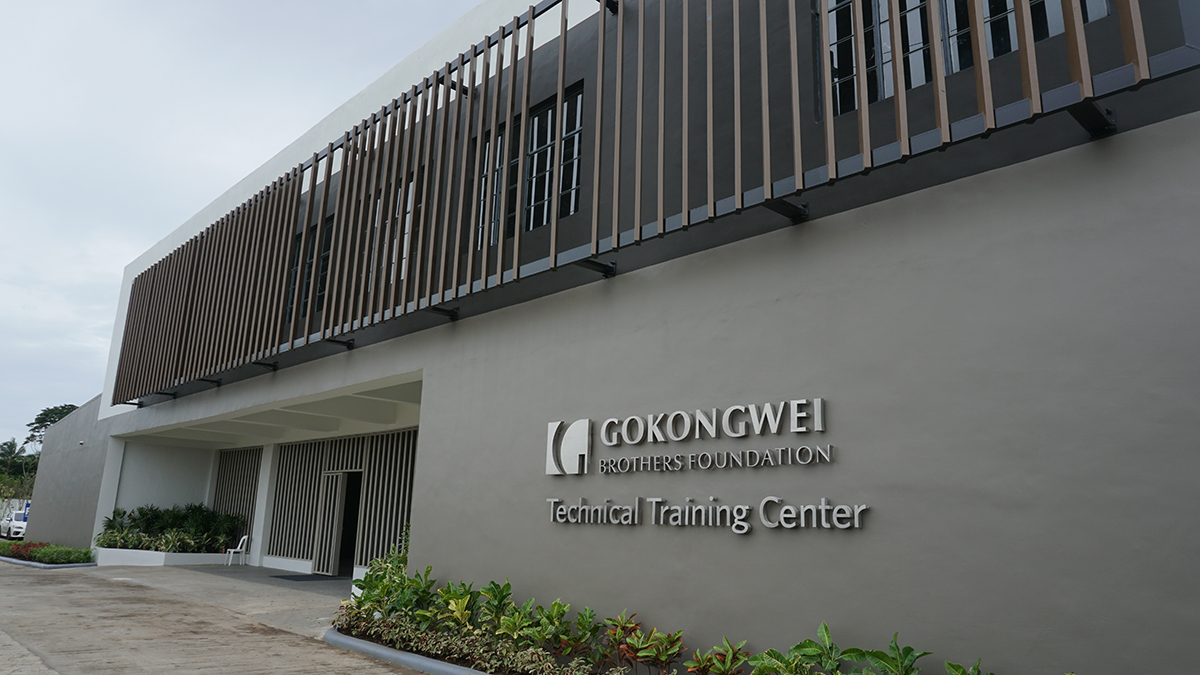 Inside the school are 12 industry-standard laboratories, three lecture rooms, and two training rooms. Scholars, who are also entitled to free meals and snacks daily, dine together in the canteen, adjacent to a multi-purpose hall.

Meanwhile, the dormitory has a total of 18 rooms that can accommodate up to 188 people. Eleven of the rooms are allocated for INJ scholars, two are for TTC staff, and the remaining five are for visiting JG Summit employees who are engaged with the technical training courses.

At the center of the dormitory lobby is a 450-square foot large wall called the “Mr. John’s Wall”. The mural shows elements that depicts the founder’s journey in building JG Summit Holdings as one of the biggest Philippine conglomerates. The bicycle symbolizes his hard work, responsiveness to change and boldness to dream amid the uphill challenges to come his way. One of these obstacles was when he survived a typhoon in the middle of the sea, represented by the rubber tire – the same item he used to get through the rough waters.

“GBF TTC, I believe is symbolic of what the family stands for - a drive for excellence through the continuous learning and development of its employees in order to drive for national progress; through the education and actual employment of our high potential but underprivileged youth,” said Colet in a presentation after the ribbon-cutting. 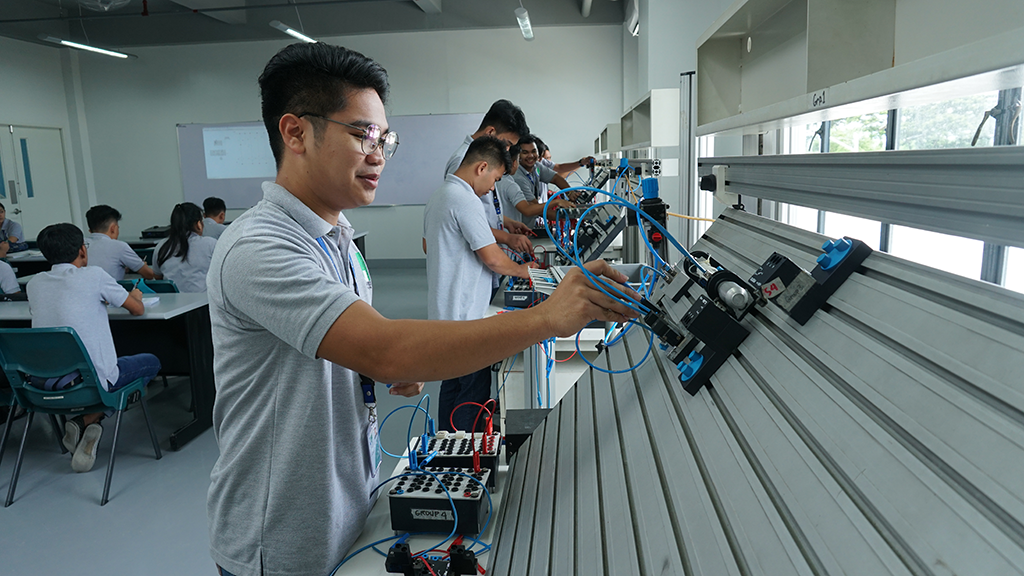 The two new buildings, the industry-standard training equipment, and the brand new furniture only make up the physical structure of the GBF Technical Training Center. At the heart of this new center is the hope and excitement in the hearts of the people who run the TTC – the staff, the scholars, and partners from URC and the whole of JG Summit.

For months, staff of the center headed by TTC Director, Engr. Manuel Mirabuenos, has ensured that the new structure will be a place to call home, not only by the scholars, but also by everyone contributing to the center and its programs.

In his special message during the launch, GBF Secretary Lance Gokongwei lauded the people who bring life to this institution.

“It’s a pleasure to be here and to see the fruits of all the hard work and dedication of the entire GBF team… I’d like to thank our scholars here for giving us an opportunity to work with them. After this batch, we have graduated more than 300 scholars. We are very happy to work with the most deserving of students,” he added.

He also thanked URC and JG Summit representatives present who are working very closely with GBF in the implementation of its programs.

Representing the INJ scholars, Abellera responded to Gokongwei by affirming the inspiration they found with the people behind GBF.

“Here at GBF, we are a family. We learn how to share with one another together with the instructors, staff, and our Director who has become our second parent. GBF TTC is our school. GBF TTC is our home,” she said.

“Thank you for opening a door for those who have big dreams in life, not just for themselves but also for their family, and the community.”