Gokongwei Brothers Foundation (GBF) conferred on November 27 the GBF Young Scientist Award to 12 student-researchers whose projects bagged top prizes at the Department of Education’s (DepEd) 2020 National Science and Technology Fair (NSTF) and represented the Philippines in the 2020 International Science and Engineering Fair.

The recognition came with a college scholarship to encourage the young scientists to pursue science, technology, engineering, and mathematics (STEM).

More than a thousand students, teachers, friends, and family members across the country tuned in to the virtual event as the young innovators and their respective projects were given their time in the spotlight.

Hosted by journalist Kara David, the program themed "Champions of Change: The Future Stems from Today" kicked off with a heartfelt message from GBF General Manager and Trustee Lisa Gokongwei-Cheng who lauded the young scientists’ successful efforts to solve real-life problems in their community. 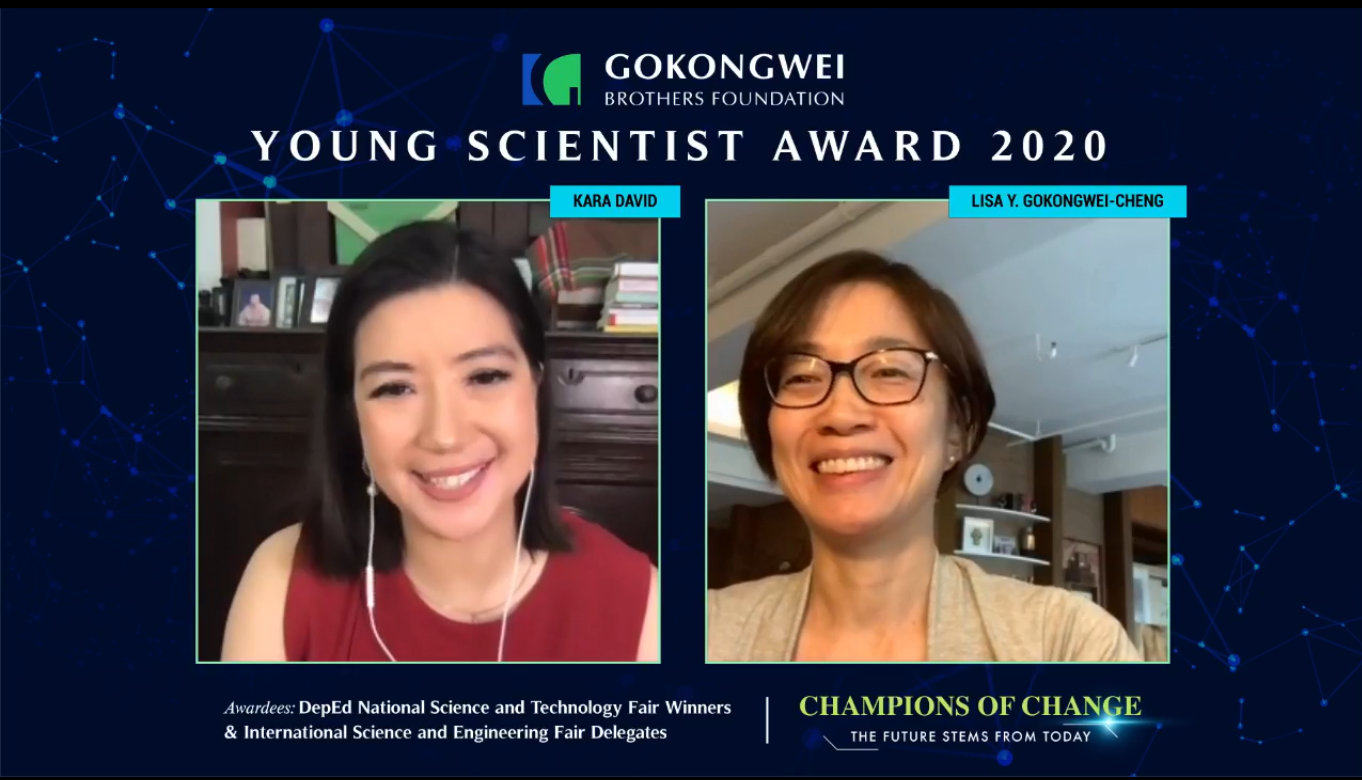 “We thank our guests and partners who made time to join us because they share GBF’s belief that recognizing young minds’ contributions to science, innovation, and research is of utmost importance. Contributing to a body of knowledge requires no age,” she said. “The future stems from every day that our learners stay curious and seek answers.”

“I am happy to see the next waves of scientists that would follow Dr. Fe del Mundo, Dr. Gregorio Zara, Dr. Juan Salcedo, and other national scientists who made significant contributions to knowledge and made our country proud,” she added.

Dr. Torio said DepEd could not be any prouder of the 12 awardees who all came from public high schools. “You reminded us that science is not something that is out of reach or just for the privileged few. Your endeavors have once again shown that science is for everyone and that persistence and discipline coupled with a strong desire for discovery is the perfect recipe for doing research,” she said.

To continue nurturing these inquisitive minds, however, a strong STEM education is critical. In a passionate speech, Director Jocelyn Andaya of the DepEd Bureau of Curriculum Development stressed the role STEM education plays in building the nation.

“Technology changes the world we live in at a lightning pace, and the consequences are far-reaching,” she said. “It behooves us to ensure that our students find meaning in what they do in school and to make it relevant to them and to raise awareness as to what they can contribute to transform society to transform their country.”

The message of a greater good isn’t lost on the awardees who, in the course of their journey, found meaningful purpose in their work. “What we must realize is that we do research not only to pass a major requirement or for us to graduate,” shared Lorraine Joy Bales, one of the student-researchers honored at the ceremony. “We do research in hopes of helping our fellow men and our community by providing tangible solutions to existing problems.” 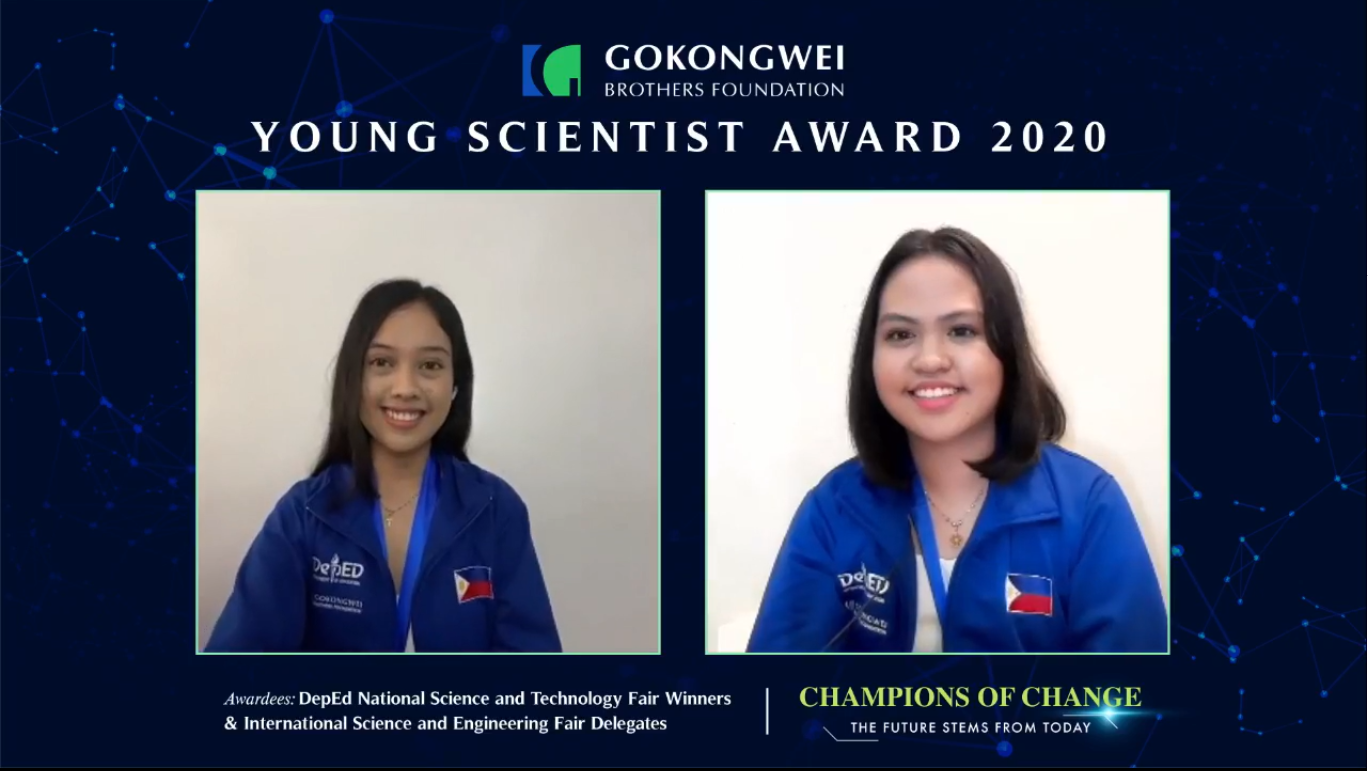 And while the awardees topped DepEd NSTF and represented the Philippines in ISEF, the country’s and the world’s largest pre-college science fairs respectively, it’s clear that the joy isn’t in just the medals of the accolades.

“Most importantly, you also get to help the people in need, which is a far greater prize than anything you will ever win in competitions,” said Marian Ledesma, another GBF Young Scientist Award recipient.

This admirable act of service is evident in their work. 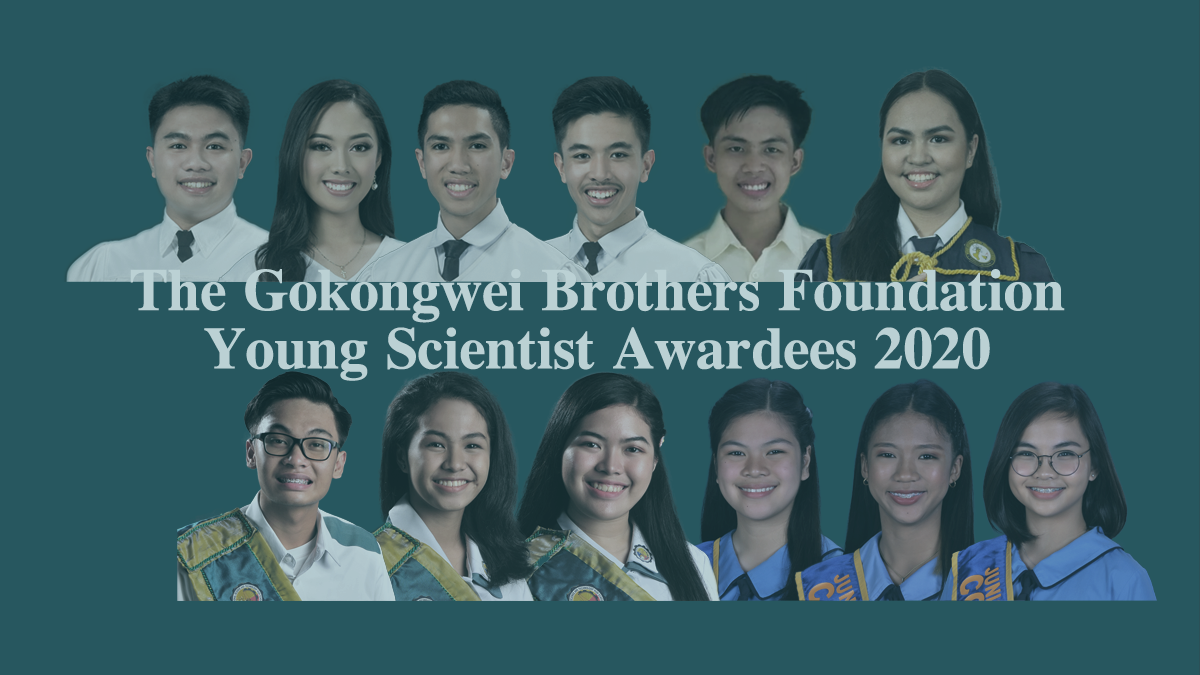 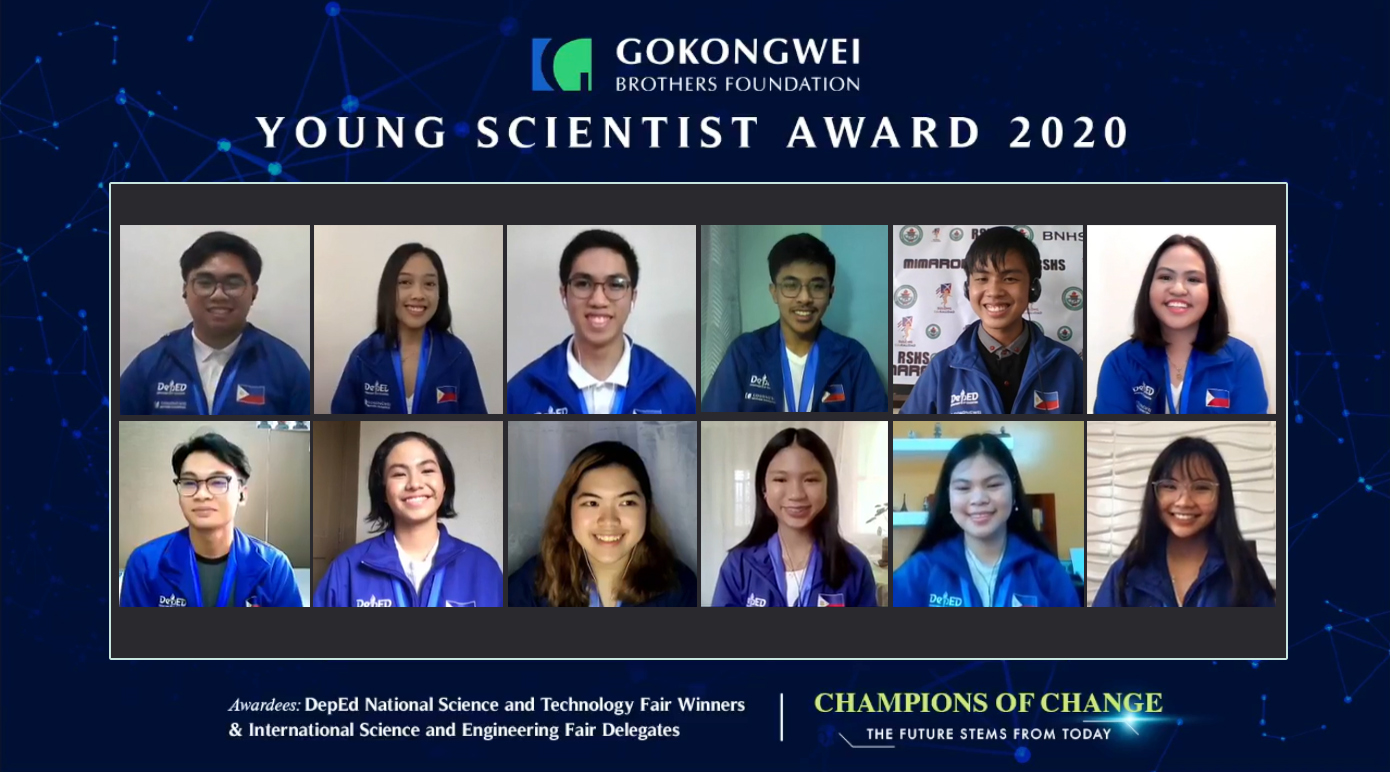 Franklin Razon from MIMAROPA Regional Science High School found a way to integrate repurposed materials and natural fibers in patola and coconut into an oil retrieval device for use in oil spill response.

Chloe Heather Ellano, Adoniram Balagtas, Thea Marie Lumabi from Caloocan National Science and Technology High School developed a helmet technology that may lower incidents of motorcycle theft and rider accidents due to driving under the influence.

Marvince John Araneta and Lorraine from Iloilo National High School invented a portable water monitoring kit that utilizes carbon quantum dots to detect the presence of heavy metals, making it easier for everyone to check for water contamination.

Marian from Negros Occidental National High School studied the potential of EDTA-mGO, a magnetic nanoadsorbent from graphite, in removing organic pollutants from water and making the adsorbent easily retrievable after use.

A community celebrates together

It has always been one of GBF’s goals to encourage young Filipinos to aspire for and achieve excellence in the field of STEM and innovation, according to GBF executive director Grace Colet.

“We believe that if we can inspire the youth to dream and work hard towards their dream of becoming a scientist for our country, we will be, in effect, contributing directly and powerfully towards a better future for the Filipinos,” she said. 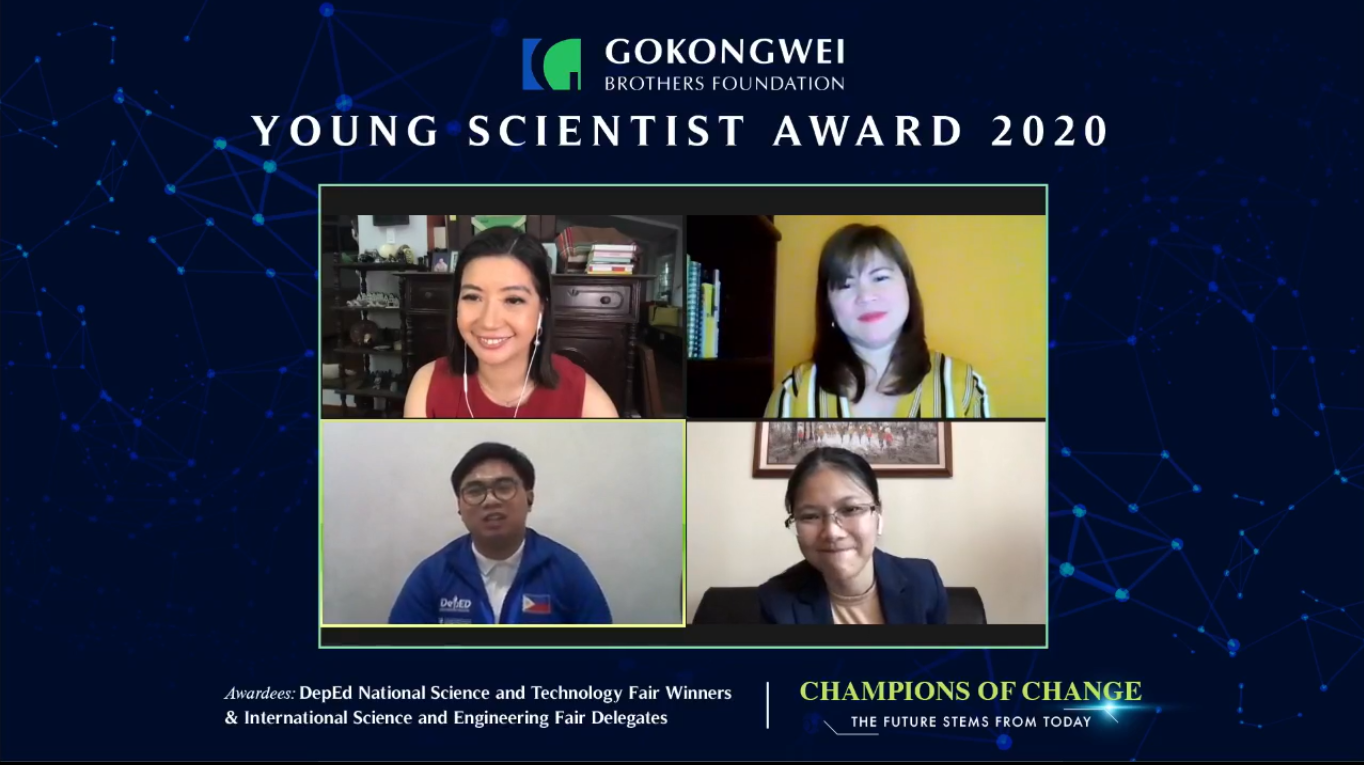 To inspire the young scientists to keep striving for new heights, GBF surprised them with a short, inspirational video that showed how different people representing the community found hope and strength in their achievements.

The student-researchers, however, also had a surprise of their own. In a touching tribute, they expressed their gratitude for the teachers and mentors whose constant guidance helped them achieve their goals.

“It really says so much about the meaning of the work,” says Dr. Reinabelle Reyes, the program’s keynote speaker and data scientist and educator. An alumna of ISEF herself, she leaves the awardees as well as any aspiring young scientists in the audience with words of encouragement. “Keep that curiosity, that drive, that discipline that you learned, [and] the people you met along the way,” she says.

It’s clear that this is just the beginning of their journey. As more doors continue to open for these student-researchers, GBF, DepEd, and other members of the STEM community are determined to help them succeed every step of the way.