Gokongwei Brothers Foundation is set to confer the GBF Young Scientist Award (YSA) to 12 students whose outstanding research and innovations won top awards in the Department of Education’s National Science and Technology Fair (NSTF) 2020 and carried the Philippine flag in the International Science and Engineering Fair (ISEF) 2020.

In celebration of the National Science and Technology Week, GBF will honor this year's GBF Young Scientist Awardees in a virtual conferment ceremony on November 27, 2020, 9:45 am to 12pm, via Zoom and GBF's Facebook Page.

"GBF congratulates this year's GBF Young Scientist Awardees for their admirable work. By recognizing these young scientists and sharing about their work through this celebration, we hope to inspire more young people to appreciate STEM (science, technology, engineering, and math) research, and seek innovations that help their own communities. Now more than ever, we would want our learners to realize the crucial importance of STEM and for them to be encouraged to be movers in these fields," said Grace Colet, GBF Executive Director.

This year's honorees are proponents of the top six research projects in DepEd’s NSTF 2020 held in March. A highly competitive science fair, only top winners from the school, division, and regional levels advance to the nationals.

Due to the coronavirus pandemic, organizers cancelled this year's May competition in Anaheim, California and resorted to holding a virtual gathering in June.

As DepEd's partner for NSTF for two years now, it is among GBF's commitments to send overseas the Philippine delegates to ISEF and to recognize them as GBF YSA. Established in 2019, GBF YSA recognizes Filipino youth demonstrating global excellence in STEM. The GBF YSA recognition comes with STEM college scholarship.

GBF honors this year's awardees with hopes of inspiring more young people to aspire to become scientists and innovators themselves. The November 27 conferment event will highlight the awardees' works and research journey, and feature encouraging words from education leaders and renowned Filipino scientist and ISEF alumna, Dr. Reinabelle Reyes. 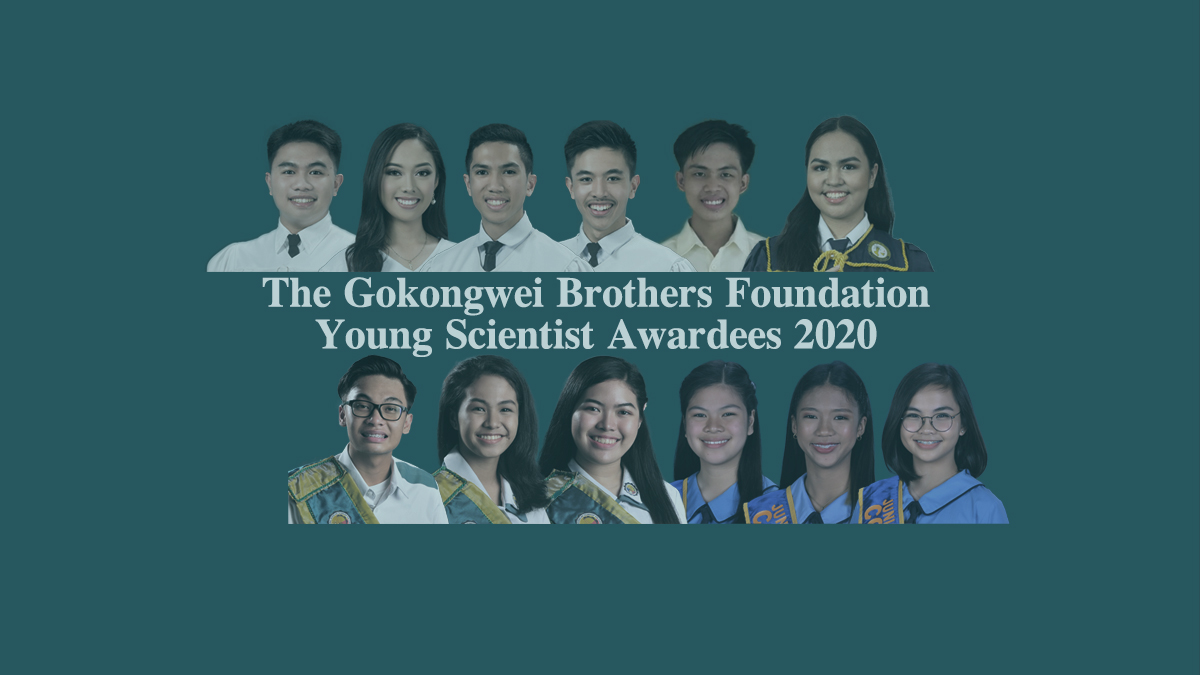 Concerned about water quality in some of their nearby communities and the high cost of water sample testing, Marvince and Lorraine developed a portable device that detects the presence of mercury and lead and in water. Utilizing carbon quantum dots, their prototype won them the top award in DepEd NSTF 2020 Physical Science Team Category. The team was mentored by Dr. Ronilo V. Aponte.

Ray and Rafael studied nipa palm sap as a potential source of lactic acid bacteria with DNA protective properties against free radicals that trigger cancer development and other degenerative diseases. Their study on nipa palm, an abundant and usually disregarded material in their locality, garnered them one of the top awards in the DepEd NSTF 2020 Life Science Team Category. The team was mentored by Dr. Ronilo V. Aponte.

Using dried patola, coconut husk, arduino modules, PVC pipes, and other repurposed materials, Franklin developed a device that may be used in oil spill cleanup. Controlled by a smartphone via Bluetooth, his prototype designed to float and retrieve oil from water won him the top award in the DepEd NSTF 2020 Robotics and Intelligent Machines Individual Category. He was mentored by Ms. Melanie Ramos.

Marian studied the potential of EDTA-mGO, a magnetic nanoadsorbent from graphite, in removing organic pollutants from water and making the adsorbent easily retrievable after use. Her research that may have potential use in improvement of water purification system won her the top award in the DepEd NSTF 2020 Physical Science Individual Category. She was mentored by Ms. Glaizelle Leonoras.

Motivated to contribute to improving road safety for motorcycle riders, Adoniram, Heather, and Thea developed an Arduino-based anti-theft, alcohol-sensing, and collision-sensing helmet. Their prototype programmed to have driver protection features won them the top award in the DepEd NSTF 2020 Robotics and Intelligent Machines Teaml Category. They were mentored by Mr. Rex Mendel Capili.

Using fruit flies as their subject, Arabelle, Jesscel, and Giuliana studied the potential of takip-kuhol plant in possibly reducing alcohol dependency and mitigating the effects of alcoholism. Their study won one of the top awards in the DepEd NSTF 2020 Life Science Team Category. The team was mentored by Mr. Jerone Mejia and Ms. Mary Lorraine Lodoy.

Join us on November 27

Interested attendees can join the virtual event via Zoom by registering through http://bit.ly/gbfysa2020zoomregistration or catch the live broadcast via GBF's Facebook Page at www.facebook.com/gokongweibrothersfoundation.

GBF is a family foundation that strives to make a last impact on education in the Philippines. Its core thrust is advancing STEM education, believing that this is the driving force toward sustainable national development.