Hardships and times of testing are part of life; they separate those who will be defeated by them from those who will rise above them. For those who persevere, they come out the other side with the character necessary—for the next challenge. Just ask James Cembrano, a 21-year-old Iskolar ni Juan. Left to care for his mother and seven siblings as the man of the family when his father died unexpectedly when Cembrano was just a first-year high school student, he had two options: despair or do what was needed to be done.

Cembrano chose the latter. He recalls working on weekends doing odd jobs at construction sites while still in high school, walking two kilometers to get to school every day, making do with charity from classmates, and finding ways to live on what he had. “Sometimes, all I’d have was a peso for food, so I’d buy chips and eat them with rice,” he says, in Filipino. Through it all, he always put his family’s needs above his own.

Due to his family’s financial difficulties after his father’s death, Cembrano accepted that his education would end with high school. Although, he’d had the chance to apply for a sports scholarship for table tennis at a small college in Manila, his mother had dissuaded him. The scholarship wouldn’t cover other miscellaneous school fees and the family had no money to spare. But when an aunt who lived near the Universal Robina Corporation plant in Dasmariñas, Cavite, asked him if he wanted to apply for the Gokongwei Brothers Foundation’s Iskolar ni Juan program, a scholarship that would not only pay for his technical education but would also cover miscellaneous fees, housing, and expenses, he wasted no time submitting the requirements. “I didn’t think about whether I would pass or not; I just needed to know that I’d tried,” he says. The happiest day of his life, he says, was when he found out he’d been accepted. A door that had seemed closed had opened.

As a GBF Iskolar ni Juan, Cembrano received the technical and theoretical knowledge he couldn’t have just picked up on the job from occasional construction work. Practical subjects in the Mechatronics curriculum—electricals, pneumatics, programming, hydraulics—taught him skills that would translate to more opportunities after graduation. Even more important, says Cembrano, are the values he’s learned through the program. “The best thing about the Iskolar ni Juan program is that it’s taught me how to be a better person,” he says. “I learned the importance of discipline and how to get along with people,” he adds. 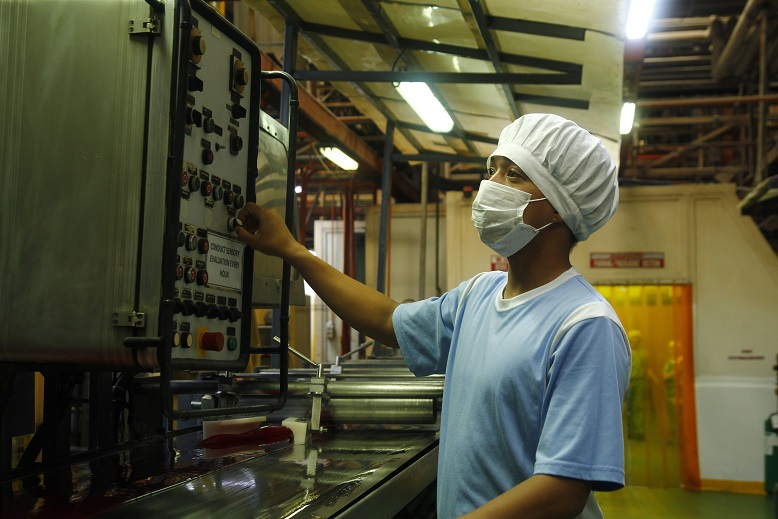 Now, on the job, he continues his education through industry immersion. He works as a Production Operator in the Cooking Section at URC Cavite, where he operates  a machine that makes Dynamite and XO candies. “Here, I really learned what the word ‘responsibility’ means,” he says. “I need to be responsible because one mistake could stop the whole production and cost the company money.”

With the keys to his future in his hands, he’s now able to open doors for others like him. His stable income has allowed him to put two siblings through school and to help a cousin graduate. Two other siblings have followed his example and are now in the Iskolar ni Juan program. One sibling lives with him and is studying under the Alternative Learning System. Two other siblings are working students employed by one of his aunts.

His story is proof that anything is possible, so one must never stop putting in a good day’s work. “I want to continue improving myself. I might have my own family one day and I want to make sure I’m able to provide for them,” he says. His father left big shoes to fill when Cembrano was a boy, but he’s grown into them gracefully. He texts his mom every morning and sends her money every payday, just as his father would have wanted. “I’m inspired by what my father told me before he passed away—the oldest son should stand as the father to his siblings. I feel that I’ve achieved this.”